Full Name
H.E. AMBASSADOR ALEXANDER MARSCHIK
Company
Permanent Mission Austria to the United Nations
Speaker Bio
Before his latest appointment, Mr. Marschik was Director-General for Bilateral Affairs and European Union-Common Foreign and Security Policy and Political Director in his country’s Ministry for Foreign Affairs since 2018. He previously served as Director-General for International Affairs and Political Director from 2015 to 2018, Ambassador to the European Union’s Political and Security Committee in Brussels from 2011 to 2015 and Director for Disarmament, Arms Control and Non-Proliferation in the Ministry for Foreign Affairs from 2007 to 2011.

Mr. Marschik holds masters and doctoral degrees in law from the University of Vienna, where he also lectured on international law from 1990 to 1998.
Speaking At
Uniting Chief Legal Officers to Transform Governance 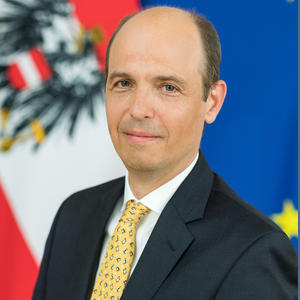