Pedro Sánchez has been President of the Government of Spain since June 2018. He holds a Doctorate in Economics and is General Secretary of the Spanish Socialist Workers' Party (Spanish acronym: PSOE), which he joined in 1993. He was also General Secretary of the PSOE, Leader of the Opposition and candidate to the Presidency of the Government between 2014 and 2016. Previously, he was a Member of the Lower House of Parliament for the constituency of Madrid and a City Councillor for Madrid.

Married with children, Pedro Sánchez completed his secondary school studies at the Ramiro de Maeztu Institute in Madrid where he was a member of the Estudiantes basketball squad. In 1995, he graduated in Economic Science and Business Studies from the María Cristina Royal University College, a centre attached to the Complutense University of Madrid. He subsequently completed two postgraduate courses: a Master's Degree in EU Economics from the Free University of Brussels and a Diploma in Advanced European Economic and Monetary Integration Studies from the Ortega y Gasset University Institute.

In 2012, Pedro Sánchez received his Doctorate in Economics from Camilo José Cela University, where he lectured in economics.

Prior to becoming a university lecturer, he worked as an adviser at the European Parliament and was a member of the cabinet office of the United Nations High Representative for Bosnia Herzegovina.
Speaking At
State of the World 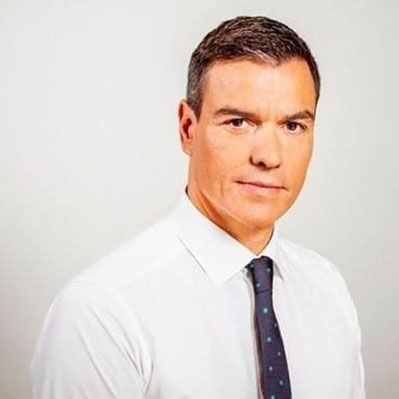