She started her professional career journey in BERNAMA where she worked as Editorial Executive after she completed her degree in 1993.

In 1994, Dato’ Suriani joined the Administrative and Diplomatic Service where she was first posted at Malaysian Administrative Modernisation and Management Planning Unit (MAMPU) in Prime Minister’s Department. Upon completing her Diploma in Public Management in 1996, she was in the top 10 of her class and obtained an excellence award.

It is fair to say that Dato’ Suriani has a vast experience in trade and industry as she had served in Ministry of International Trade and Industry (MITI) for 12 years. Before being appointed as the Special Officer to the Minister of International Trade and Industry in 2006, she was the Assistant Secretary for Bilateral and Regional Division as well as ASEAN Economic Cooperation Division. She has also served as Principal Assistant Director at the Multilateral Trade and Policy Division and in 2008, she was promoted as the Director. Later that year, she was trusted to lead the FTA Policy and Negotiations Coordination Division as the Director.

In 2009, under the Prime Minister’s cross fertilization program, she was selected to be the Manager for the Corporate Planning Division of Proton Holdings for one year. Upon her return, she was posted to the Ministry of Defence (MinDef) where she undertook the post of Undersecretary and was later promoted to Deputy Secretary General (Policy) in 2014.

Her excellent contributions had won her several awards in the organization she served including Best Officer Award (1999) and Excellent Employee Award (2000). Dato’ Suriani has been conferred by the Raja of Perlis three state awards, namely the ‘Darjah Ahli Mahkota Perlis’ (AMP) in 2006, the ‘Darjah Seri Sirajuddin Perlis’ (DSSP) in May 2012 and recently the ‘Darjah Dato’ Paduka Mahkota Perlis’ (DPMP) in May 2022. She was also conferred the ‘Darjah Indera Mahkota Pahang’ (DIMP) from the Sultan of Pahang in 2015. In 2020, Dato’ Suriani has been appointed as Adjunct Professor at School of Multimedia Technology and Communication (SMMTC) Universiti Utara Malaysia (UUM) from 2020 until 2022.
Speaking At
ASEAN SMEs: In the Driving Seat for Transformational Change towards Sustainable Development 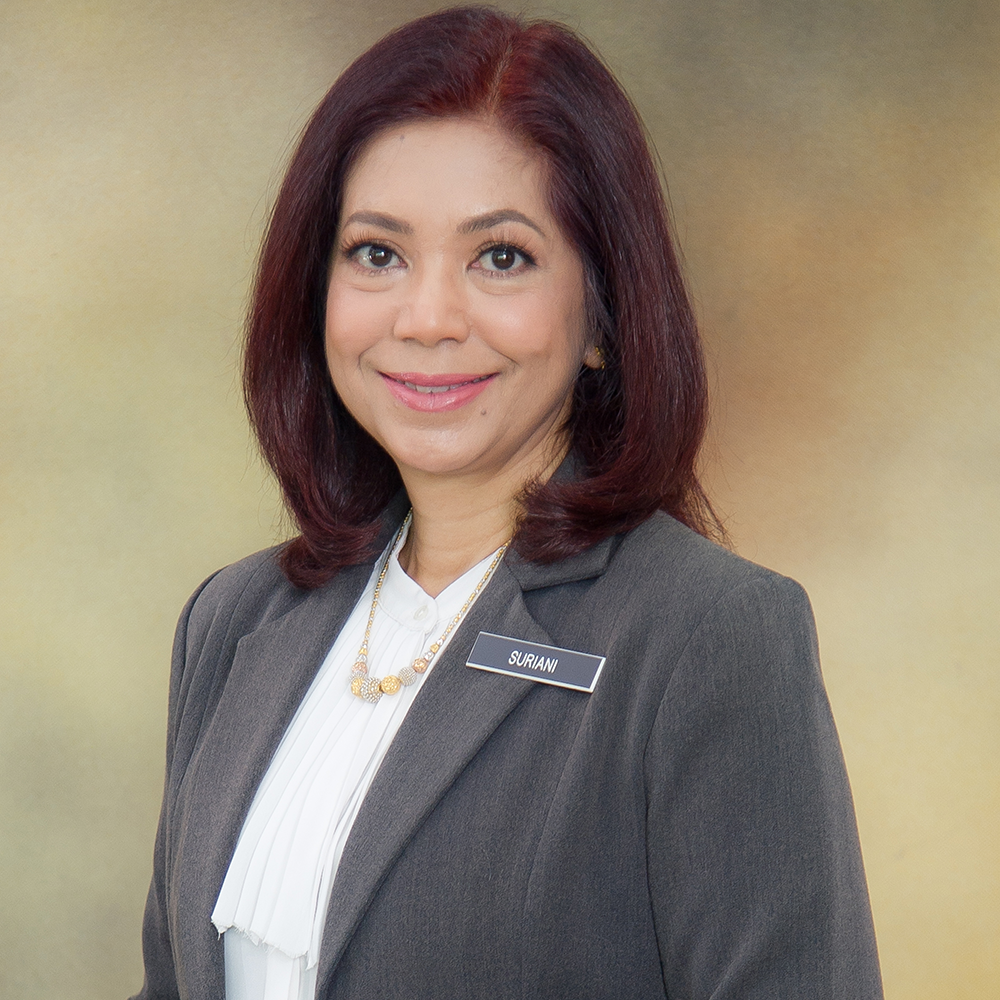